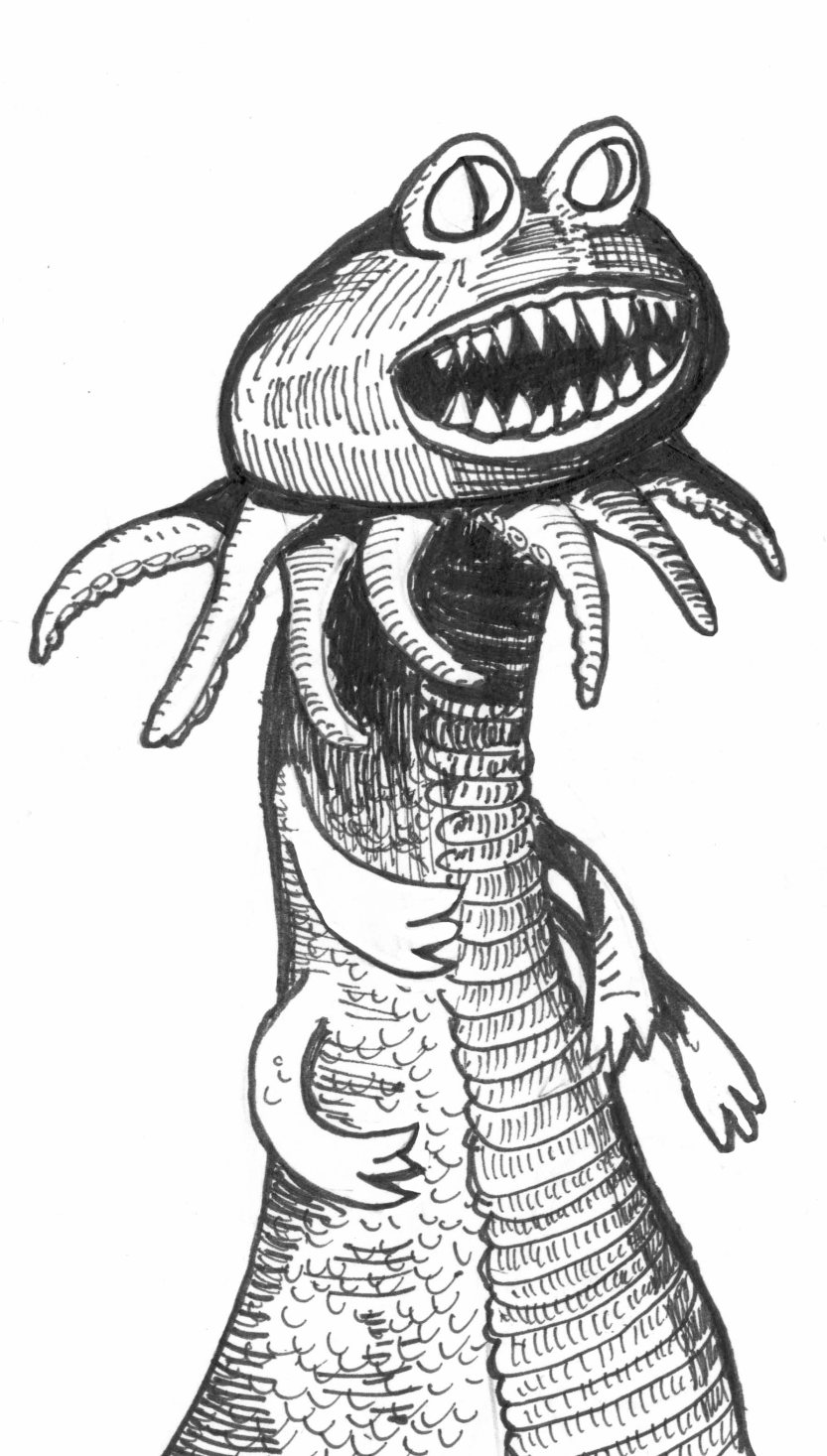 Mother of Monsters is a 52-page adventure designed for HeroQuest: Glorantha (Moon Design, 2015). Written by Robin D. Laws and released by Chaosium, Mother of Monsters was written as a fundraiser for THE KRAKEN, a “high comfort” role-playing convention held annually in a castle in Germany. The scenario is advertised as “an example of adventures that puts the players and their choices at the heart of the action.” Due to the lengthy holiday break, the Reckoning of the Dead team had time to play Mother of Monsters, and the following report recounts our experiences at the table.

Mother of Monsters posits that, “One of the classic paradoxes of scenario writing tells us that the more fun an adventure is to read alone by yourself, the harder it is to make into a truly interactive experience for your group of players.” A thought provoking statement, and I’m not aware of this classic paradox. I wish he’d used an example or two, because without explanation it reads like an excuse to under-write the scenario. By claiming that making the scenario “fun . . . to read” would lessen its effectiveness as a “truly interactive experience,” it seems like Laws is absolving himself from having to write a scenario that is enjoyable to read.

Following this claim, Laws offers a tight framework that describes each potential situation in the adventure, what (obvious) choices the players have, and to which upcoming situations those choices lead. None of the situations have long (or even short) descriptive paragraphs, and only the briefest of information is listed. An accompanying flow chart shows the narrative pathways that the adventure can take, and visually shows how the scenes connect. It’s a nice placeholder for the overall scenario, and at any point in the game you can track where your players are. One danger of the brevity of the prose is that it might mislead game masters into thinking that a lot of prep isn’t necessary for the session, because you essentially have a road map of the adventure and bullet point responses to anticipated player actions. It trapped me a bit, and in play I wish there was more meat on the skeleton in particular scenes.

The game is set in Glorantha, a massive fantasy world that is home to HeroQuest: Glorantha, Chaosium’s upcoming RuneQuest: Roleplaying in Glorantha, and Pelgrane Press’s upcoming 13th Age in Glorantha. The world is a huge creation, brainchild of Greg Stafford from back in the mid-60s, and lots of creative energy has been spent enhancing and expanding that realm. Mother of Monsters takes place on the shores of Glorantha’s southern continent, an area similar to but not exactly like “Phoenicia, Tyre, Sidon, and [Bronze Age] Punic Carthage.” It’s refreshing that the scenario isn’t set in one of the more European-like cultures, but it was difficult for a game master inexperienced with the setting (me) to breathe life into the city, its culture and its citizens. Small clues in the scenario helped, as did the marvelous illustrations by Dan Barker, which I freely shared with my players at appropriate points in the game.

For all its choices, Mother of Monsters is fairly straightforward, with a single overarching plot thread: the Mother of Monsters, a gigantic chaos beast the size of Godzilla, wanders the land laying eggs from which horrible monsters hatch to wreak havoc. The city that the players start in lays in the path of the monsters, and the player characters must save the town from destruction. Kind of. There are other bits of intrigue and a political subplot that the players can participate in. True to his word, Laws offers several routes as the players navigate the overall plot. It’s fairly linear, but not in a single straight line. While there are choices, those choices always funnel back into the main plot. So, instead of hitting scenes A, B, C, and D in order, like a more traditional “railroad” scenario, players go from A to B or C, before arriving at D. The point, remember, is to provide a simple framework so that the action focuses on the players and their actions.

From the players’ point of view, Laws succeeds. His loose narrative framework made my players feel like their choices affected the story’s outcome. I think they felt at the center of the action. There was a disconnect at times between my players and the game, but this might have been due to the awkward starting point–which I won’t spoil except to say it puts the player characters in a situation that makes most players chafe–and the massive setting that I didn’t have a tight handle on. From my point of view, the game master’s, if felt like pieces moving along a game board, and that what little choice the players thought they had ultimately led toward the same goal. I was never challenged. The players never did anything, were never presented with the option of doing anything that made me think, “oh, interesting, how do I handle that?” The framework was too tight.

With it’s tight framework and solutions to potential choices, Mother of Monsters doesn’t leave a lot of room for the game master to improvise, and I think my one main objection is based on style rather than substance. My style is to run published adventures that give me the pieces, the NPCs and their motivations, the game board, a detailed setting or two, and suggestions about how the NPCs might interact with the PCs. Unknown Armies 1st Edition was very, very good at this. The NPCs had motivations, the PCs had opposing motivations, and we locked them in a box and watched what happened. That I liked; that’s my background. Mother of Monsters sits on the other end of the spectrum, giving me the pieces, the game board, and telling me what to do next based on what the players do. From the players’ point of view, they don’t see the difference. They do something, there is a reaction. The difference comes behind the GM screen. Did I come up with the reaction, is it organic to the situation and the people playing, or is it scripted well beforehand?

Mother of Monsters does what its author wants it to do. Laws’ stated aim was to write an adventure that puts player choice “at the heart of the action,” and I think my players felt like their choices made a difference. Laws took a single page outline from one of his earlier works, another THE KRAKEN chapbook called Sharper Adventures in HeroQuest Glorantha, and expanded it into a complete adventure. Part of his intent is to show us how he turned a single page outline into a complete adventure, how he takes the spine of an adventure and then builds choices along it to give the players options but hold them to the major plot, and he absolutely does that. Mother of Monsters is a penetrating view into a very successful, very popular rpg author’s mind. It was also fun to play, maybe more for the players than the game master, yet still a very enjoyable evening.

P.S. The featured image was drawn by Matt Ryan, not Dan Barker. We didn’t feel comfortable using Barker’s art without permission, so in the wee hours of the morning Ryan drew this. Our apologies if it looks more like the Mother of Muppets than the Mother of Monsters.

Reckoning of the Dead is starting a Patreon! If you like what we do, you’ll be able to throw a dollar (or more) our way each month to show your support. The Patreon will launch in the first week of March. Follow the blog by clicking the ellipsis in the upper corner of this page! You can also follow us on Twitter and Instagram @reckonthedead. We also have a Facebook page.

4 thoughts on “The Illusion of Choice: A Review of Mother of Monsters”