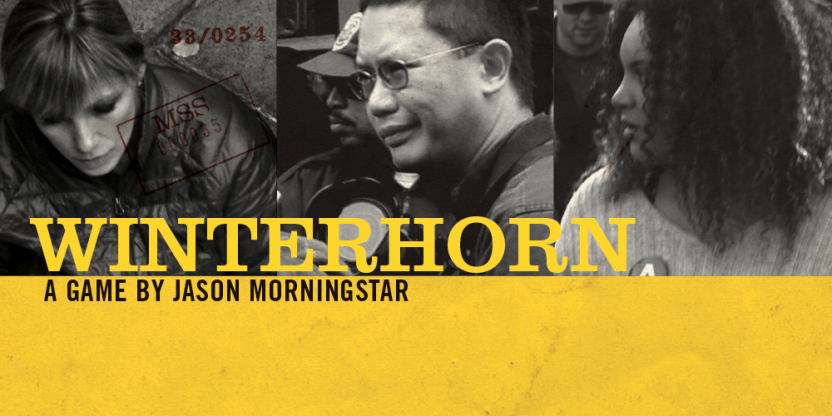 Thank you to our generous Patrons at Patreon.com, who helped bring this content to life!

Before we jump into our review of Winterhorn, we wanted to let you know that Bully Pulpit Games has a Kickstarter going on right now for Star Crossed: The Two-Player Game of Forbidden Love. Be sure to check it out!

Winterhorn positions itself as a game for activists to learn about their enemies–the (often corrupt) bureaucracies who will stop at nothing to maintain their government’s grip on power. Winterhorn’s the newest game from Bully Pulpit Games, who are known primarily for systems that lack conventional GMs, like Fiasco, Night Witches, or The Skeletons. Like the three I just mentioned, Winterhorn was written by Jason Morningstar.

In Winterhorn, you and the other players play a group of, essentially, state department bureaucrats tasked with destroying an activist group known as “Winterhorn.” The game has no GM, but splits conventional GM roles out among the players, one of whom is in charge of note-taking, another keeps track of time, another reads the rules about the opening phase, etc. This seemed a clever way of doing business.

Ultimately, the game revolves around a set of 12 “programs,” designated by twelve groups of cards. The choices you make about which of the 12 programs to pursue are the game, with roleplaying happening in and around those choices.

Winterhorn is a mix between a role-playing game and a cooperative strategy card game. We had the great fortune to play the game with our significant others. Bully Pulpit Games supplied us a copy of the game (for free) at our asking–thanks again!–and the four of us settled in for a game after dinner.

I’ll be honest; I was hesitant at the onset of the evening. RPGs without GMs make me wary, and the subject matter, playing state department bureaucrats trying to break up an activist group, didn’t ring any of my “gotta play this” bells. But Noah’s encouragement helped me break through my hesitation, and I don’t think I’ll ever pass up an opportunity to play a game with him and our sweethearts.

Setting the table for the game was fun. The cards were separated into different piles with different functions; the programs Noah mentioned, the player-characters, and photographic representations used for the Winterhorn activists. Accompanying bureaucratic labels for our folders and personal notes helped set the scene. One of us recorded the information about the activists on a giant piece of white paper. Circles and drawn diagrams and arrows indicated who was the leader, the heavy, the outlier, and the other NPCs. It was extremely visually appealing and instantly brought to mind the notes and photographs tacked to cork boards and interlaced with colored thread that we’ve all seen in many, many detective shows.

The game’s almost a parlor LARP, isn’t it? It encourages you to go out and pick up name tags “and other office supplies,” which helped set the tone of the three meetings that the game roleplays through.

Something else the rules do, which we haven’t mentioned yet, is a really good job of laying out a safety net to make sure folks don’t get too uncomfortable.

I really appreciated this. And while we never had to fall back on any of these tools, we were playing in a group that knows one another really well, and I can absolutely imagine situations in which some players could step over a line, especially in a different context. (I wonder what the playtests were like for this game…)

While you were skeptical, the game also did a good job of getting the group roleplaying. We got into arguments, there was friendly banter, and we both flirted with our respective significant others (which they spurned, of course). And, as we talked about a little after our session, there were a couple of moments when I thought about invoking “Largo,” moments when you and others at the table were arguing. You were playing an overbearing character, and I couldn’t tell how uncomfortable they were. Ultimately it all played out fine, but the game’s narrative did seem to do an excellent job of throwing us into some stressful, hot seats.

But all this begs a question about intensity. How intense did you find Winterhorn?

That’s a great question. The mechanics of the game–picking which programs to use against the activist group–separated me from the nature of the tactics we were proposing to level against the group. My strategy brain overtook my human-awareness brain, and all I wanted to do was win by crushing the group. If I remember correctly they were environmental activists. By the second round, my human-awareness brain came up to speed and I started to feel a bit deplorable. The tactics we were mutually deciding to use on the activists were ruthless, underhanded, and at some points violent. I started to feel like one of the guards in the 1971 Stanford prison experiment. And when some of the activists suffered the results of that violence, I grimaced with guilt.

While conversations got intense in our conversations, to me most of that felt like banter. We know each other well and had a good idea how strong our relationships are. I didn’t realize that my character was the bureaucratic superior of the other three characters until the game ended. Our strategy discussions were extremely cooperative and we all listened to each other, accepted others’ opinions, and remained open to jettisoning ours if others disagreed.

Let’s get into the specific nitty-gritty of Winterhorn. What were some of the highlights of the game for you?

Standout for me was a tiny roleplay mechanic called “Making the Call.” When one of the player characters has made an especially egregious error (called too much attention to the bureaucratic group, for instance), the game tells them to “make the call,” which involves answering an imaginary phone and roleplaying one half of a conversation with your boss. For some reason, I found these moments really impactful (and stressful!). This only happened a few times, and something about their infrequency, along with seeing the caller’s distress played out across their face, added to the depth of the game for me.

There was a moment I found kind of jarring, and seemed to work against the aim of the game. We always had the option of violence at our disposal, and when we relied on those tactics things went bad (unsurprisingly). Towards the end of the game, as the result of one of our choices, we found an operative we’d installed in the Winterhorn group murdered, obviously discovered and removed by the activists. For me, I suddenly empathized less for Winterhorn–if they’re willing to commit murder, maybe they should be stopped. Or maybe we drove them to those ends, maybe we were radicalizing them all along.

I enjoyed the discussions that sprang from playing Winterhorn. For example, one of the game’s opening stages is to assign photos to the various Winterhorn group members, a fairly random process. In our game, the leader happened to be a middle-aged white guy (I’m also a middle-aged white guy), while one of the support members was an African-American woman. I found it fairly easy to suggest breaking into the leader’s house, but doubted if I would do the same if those two roles were reversed. This led to an interesting discussion about race, learned racial prejudices, and attempts at racial parity and reparations. Other situations sparked discussions about gender, overt violence, the police state, and the insidious (and ubiquitous) use of covert electronic surveillance and manipulation, all very timely and important topics. Those are the kind of discussions I want a role-playing game to ignite, not all the time maybe, but often enough to keep those conversations current and vibrant.

We played in a very safe group. We have known each other for a long time, agree on many social issues, and trust each other. Is that the best kind of group to play Winterhorn? How well do you think Winterhorn would work at a convention or in a neighborhood gaming club?

I’m not sure, but I’m also not sure that those are the locations it was designed for. On the one hand, I’d love to be able to say that yes, everyone who’s interested in activism and social justice should play this game, and “and think about ways to harden organizations you care about against government intrusion” (as the Bully Pulpit website advertises), but I’m not sure it’s really made for the home gaming group. I can see it being put to really effective use in the context of an activist group, working together and learning.

And while there are supplementary cards that change the outcomes of programs you select (for greater replayability), I’m not sure I need to play it again.

As a member of an activist group–a peace activist group–Winterhorn wasn’t especially insightful or even that accurate. For a peace activist group, I say again. Framed as an agency working against an opposed political group or a rival bureaucratic faction, the game might make more narrative sense. Several of the NPC names have an Eastern European Bloc sound to them, and staged in a Cold War-era environment with modern means of technology has a closer fit, I think, than a modern government against an activist group. But that’s really just flavor text, at the end of the day. Winterhorn falls short of its desire to serve as a tool for activist groups to become more learned about the ways that the government infiltrates and influences them. I think its more valuable potential is as a tool that initiates group discussions about governmental infiltration and influences, as well as race, gender, and privacy issues.

While I agree that I’m not overly keen to play Winterhorn again, it has titillated me enough to wonder about Bully Pulpit Games’ other games, especially Fiasco and Night Witches, to name a couple. Maybe we should give those a spin?

Of course we should. They’re both classics. And we should mention again that Bully Pulpit has their Kickstarter running right now for a very different game, Star Crossed: The Two-Player Game of Forbidden Love, by Alex Roberts.

Reckoning of the Dead has a Patreon! If you like what we do and want to show your support, click the link and donate a few bucks a month. Don’t forget to follow the blog by clicking the ellipsis in the upper corner of this page! You can follow us on Twitter and Instagram @reckonthedead, and we also have a Facebook page.