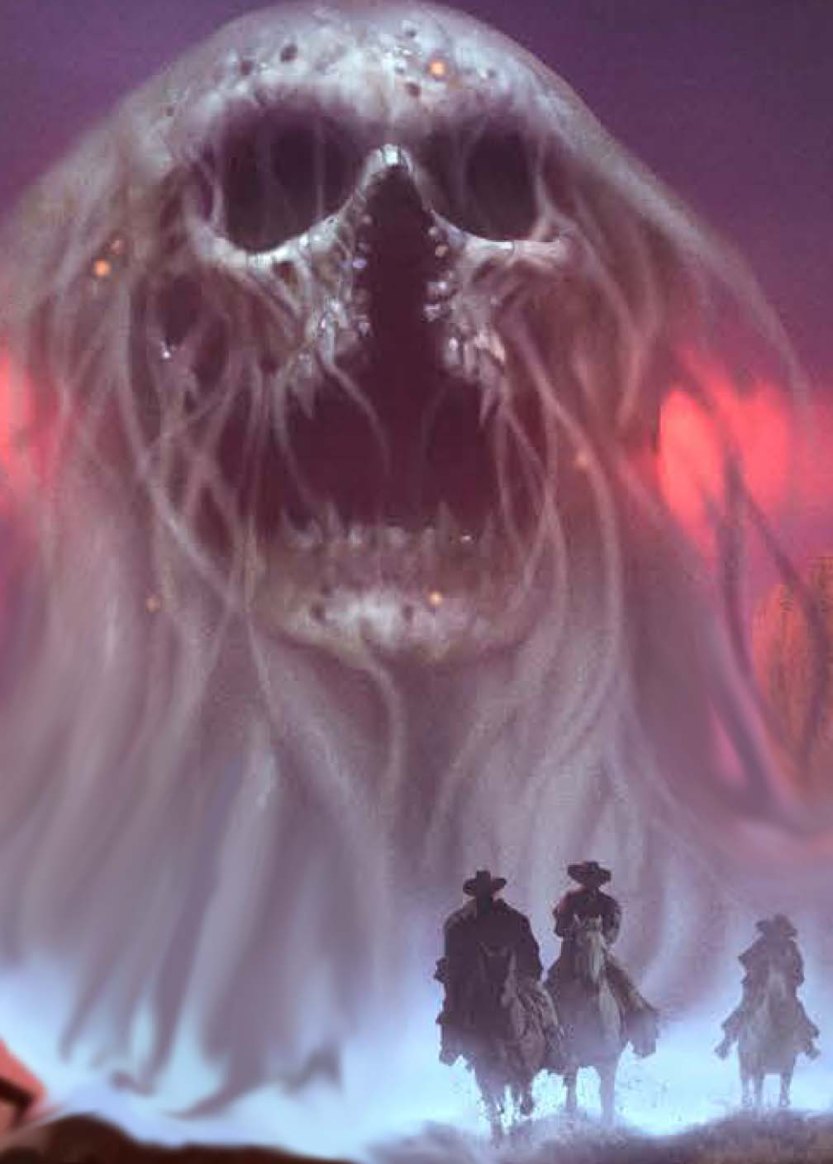 Released for Chaosium’s Call of Cthulhu 7th Edition, Down Darker Trails is a setting sourcebook that combines the American West of the late 19th century with the horrific and fantastic elements of the Cthulhu Mythos. It’s a whopping 256-page hardcover book penned primarily by veteran Chaosium author Kevin Ross, with a handful of assisting writers. A massive effort, Down Darker Trails aims to provide enough material for players to comfortably set scenarios and even campaigns in the post-Civil War wild west. Providing a new setting for Call of Cthulhu is a daunting task. Players need background material, location details, antagonists, perhaps protagonists, mood, Mythos interactions, and flavorful nuances that make us want to play in the setting. Does it succeed? Let’s take a chapter-by-chapter look see.

Let’s get this bit of praise right out of the way first — the book looks beautiful. The illustrations are top-notch, the photographs are exactly right, the maps are expertly drawn and offered in a higher resolution than in earlier books (300 dpi), and the layout is clean and easy to read. Chaosium’s layout and graphic design team just keeps getting better. Well done to all involved.

The introduction is short, a mere two pages, in which Ross briefly explains the essentials of the setting and how it meshes with the literary Cthulhu mythos. Ross leans heavily on Robert E. Howard’s stories, explaining that Down Darker Trails differs from the standard Call of Cthulhu game, emphasizing “gritty adventure rather than pure nihilistic horror.” A very good sign that we’re in capable hands is an insert explaining the use of the term “American Indians,” and how that term and other terms will be used to represent the indigenous peoples of North America (page 7). I am very happy that Ross and Chaosium strive to hold to this level of appropriate cultural awareness.

Chapter 1 is character generation, and offers us a condensed guide to making CoC characters, with a lengthier emphasis on making those characters fit the setting. Most occupations have an example from film, history, or western fiction, to help place the character in the setting and to add distinction and dimension to the variety of available gunslingers. This is good stuff: concise, inspiring, and nicely researched. The many examples help breathe life into what would otherwise just be “some kind of cowboy.” Reading these examples gave me confidence that the author knew what he was writing about.

Chapter 2 is equipment, and it’s brief and to the point, with a nice price list of setting-appropriate goods. I admittedly skimmed the long section (well, 5 pages, long for me) on the many kinds of weapons available and their minute distinctions. I’ve lost any fascination in weapons I might have had as a younger player, and now just really want to know the weapon’s damage and chance of malfunction.

The optional rules found in chapter 3 lend more flavor to the setting and cover such common western tropes as pistol fanning and shooting from horseback, as well as some setting-specific tweaks to chases and recovering from insanity. Most of it simply steers Keepers towards using the strengths of the newest edition, like bonus and penalty dice, which work very nicely.

There is a lot of meat in chapter 4. Eighty-plus pages of history running from the earliest human inhabitants (20,000 BCE according to the author) to the recently ended American Civil War and the first year of the twentieth-century: “1901: President William McKinley is assassinated.” Overall Ross presents a thoroughly researched and professionally presented treatment. Game-wise it does its job, offering what tries to be an unbiased eye on the Old West and providing players and keepers with the sorts of details they need to play. This chapter points out the power differentials between the various ethnic groups involved in the setting, and the difficulties of playing in what was historically an extremely racist and sexist period of American history.

Unfortunately, there are a few missteps, and chapter 4 demonstrates a somewhat uneven treatment of marginalized groups. On writing about the months following the American Civil War, Ross writes, “The emancipation of the slaves meant most large plantation owners were ruined, since their unpaid workforce was now gone. Corrupt Northern bankers and businessmen . . . poured into the South, causing further damage to the devastated Southern economies” (page 60). While this may be true, the tone seems to suggest that the Southern plantation owners were the ones being victimized, and the ones we should sympathize with. Are we forgetting the source of their income – slavery – and the real victims of several centuries of torment? Later, “African-Americans suffered from the stigma of over a century of slavery,” (page 67) is oddly written; by making “African-Americans” the subject of the sentence, but then not including the actual causation of slavery, this sentence implies that African Americans were somehow at fault for “the stigma” around slavery. The paragraph later describes the actions of “vengeful whites” in the South, but this sentence still contains within it an elision of the agents behind this oppression. I am not in any way implying that Ross’ sympathies or intentions are suspicious or misplaced, merely that writing about race is a delicate matter and careful sentence structure is essential. This subject needs to be addressed, and I applaud the Chaosium team and Kevin Ross for entering into dangerous, but necessary, territory. Any criticisms I have come from the understanding that we all must keep each other accountable to continue doing better into the future.

Game-wise chapter 4 does its job; it offers an unbiased eye on the Old West and provides players and keepers with the sorts of granular details they need to play. I must mention the 10 pages of Non-Player Characters drawn from the historical record, which includes a selection of famous (and infamous) folks that lived during the time period, folks like Buffalo Bill, Billy the Kid, Sitting Bull, Calamity Jane, and Wyatt Earp. There were some surprises, like Ambrose Bierce and Stagecoach Mary. These characters are wonderfully detailed, including their best and worst behavior, and my hat is off to the team that researched and put forth these delightful representations.

The next chapter, “The Supernatural West,” injects “appropriate” Mythos creatures into the setting and offers players new Mythos tomes, a treatment of the Indigenous tribes’ spirit magic, and a smattering of secret societies (cults) that roam the buttes and plains. Monster art is borrowed from other books, which was mildly disappointing, but there is a wonderful gunfight sequence in a three-page storyboard. I am disappointed that the monster entries reference Malleus Monstrorum, an out-of-print and notoriously difficult book to get ahold of. However, I am thrilled that Chaosium plans to update Malleus Monstrorum “for next year.” In that context, Down Darker Trails looks ahead in the line’s production, and I’m happy that Chaosium has decided to update one of the better books from the line’s history (and if you haven’t seen Malleus Monstrorum — or even if you have — you should be too).

Chapter 6 continues the supernatural element by detailing four otherworlds – four magical environments where the wild west can become weird (and dangerous, of course) with suggestions on how to bring the areas into play. Chapter 7 continues with this type of Keeper advice and presents four pages of suggestions, ideas, and story seeds. Again I’m impressed by Kevin Ross’s knowledge of the fiction of the Old West, and the wide range of setting-appropriate stories he pulls inspiration from.

Chapters 8 and 9 offer two locations to set a campaign in, either the prospecting gold-rush town of Pawheton or the more established border town of San Rafael, with its cattle barons and corrupt lawmen. Both areas come with a history, a handful of legends, and nearby Cthulhu Mythos features, and both are exceedingly well put together. Chapters 10 and 11 offer a starting scenario for each location, and keepers can run “Something from Down There,” set near Pawheton, or “Scanlon’s Daughter,” set among the warring ranchers living outside San Rafael. These four chapters serve as two excellent examples of how to use the historical material presented in the previous chapters, blended with the supernatural suggestions of the included Mythos creatures, and craft a hootin’, shootin’ Western scenario.

The last chapter is a selected bibliography, and indeed, Ross is a veritable expert in Western movies, television shows, and comic books, and no slouch when it comes to Western fiction and non-fiction. I would very much like to meet him, as I imagine he and I share similar experiences, growing up around the same time, watching the same television shows. I can almost envision him joining the gang for the weekly game of Boot Hill, back in the day. This chapter was a surprising treat to read.

At the start of this review I asked, Does Down Darker Trails succeed in offering background material, locations, non-player characters, Mythos creatures, story ideas, and enough tone, mood, and flavor for a complete Western setting? The answer is yes, unequivocally. Just as the wrapper suggests, Down Darker Trails is a complete setting book, and has everything you need – alongside the core rulebook – to play in a Cthulhu-infused Old West. There are cowboys, there are Native Americans, cattle ranchers and cattle raiders, weird night skies and abandoned mines filled with otherworldly entities ready to kill over-curious explorers. There are shootouts, wild horse chases, marshalls with bright shining stars, and saloon doors swinging into barrooms filled with raucous card games just two jacks away from a fist fight. It is definitely the Old West.

And perhaps therein lies its largest fault; it’s too much Old West and not enough supernatural Mythos. Despite the team’s efforts to include Mythos creatures, tomes, and cults, Down Darker Trails reads much more like an historical RPG than a horror RPG. Note that I wrote “reads.” I haven’t played Down Darker Trails, and perhaps playing at the table would relax some of the book’s historical grip. But it feels uneven: lots of history, lots of historic personages, lots of western details, and a little thin on the things that make us jump in the night. Perhaps Ross’s excellent job researching the Old West colors my perspective, but I wish the Mi-Gos and the shoggoths and the whatever-else weren’t so distant in the background.

6 thoughts on “The Good, the Bad, and the Beautiful: a Review of “Down Darker Trails””